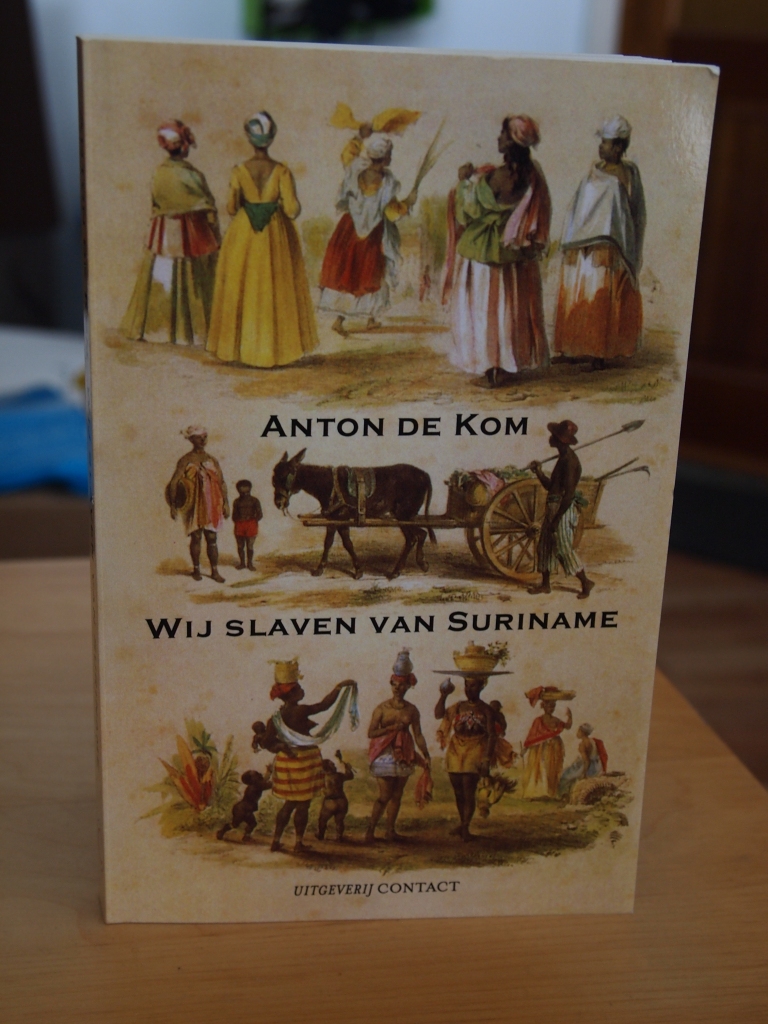 There are books that everybody knows. There are books that everybody loves to read. Additionally some books are preferably forgotten by many people because they confront the reader with a side of humanity that makes many people look away until it stares you in the face. In this post that face is the face of slavery and bonded labour which for centuries was justified by a European superiority complex.

If you ask me why I write about this book my answer is simple. My family is from Surinam. It is a country above Brazil and Argentina. It is known for its climate, richness in natural resources and fertile soil. Surinam is also known for a bloody past under Dutch rule. Because my family is from Surinam this was one of the books on my personal reading list. I was about ten or eleven when I read this book. It changed my perception of many things.

Anton de Kom is one of those rare authors who transcend their origins. If that “transcend their origins” part comes across as strange think about the following aspects of his life. Born in the Dutch colony Surinam in 1898, slavery was officially abolished in 1863 and his father was a former slave. After 1863 former slaves were given little to nothing to start life as a Dutch citizen in the colony. Former slaves received no money, nor their own land and did not have unions to protect them. Families of former slaves were often forced to work for their previous owners as their only opportunity for employment. Bonded labour was not uncommon.

The book “Wij Slaven Van Suriname”, in English “We Slaves Of Surinam” was published in 1934. The period between 1918 and 1940. Anton de Kom had been through a lot, the Dutch government did not like him for his anti-colonialist and socialist attitude. He was a Dutch citizen but also an activist threat to a pro-colonialist society. The book in tone and content directly reflects how “cheated” Anton de Kom felt in his current society.  The writing is sharp and angry, not a gentle story like “Uncle Tom’s Cabin” and Anton de Kom explicitly emphasises his anti-colonialism.

He died in 1945 as a member of the Dutch resistance. The one man the Dutch Government did not like, died for them after they had fled or surrendered. The tragic irony of an individual who transcended his origins, literally.

Relevance of the book

The moment I decided to write about books and music for the blog this book kept coming back to me. This book is still relevant today as it was in 1934. The Netherlands might be “multicultural” and many people of many origins might live here as Dutch citizens. The Netherlands only started becoming really “multicultural” in the 1950-ties and 1960-ties. After the independence of Indonesia and Surinam people with darker skin tones became part of a society of mostly light-skinned people.

Combine the developments in the 1950-ties and 1960-ties with centuries of assumed European superiority and pro-colonialism and people from the colonies migrating to a country that was once known as the “colonial motherland.” The clash of the Dutch citizens versus the “colonial migrants” did not always go well. The case of the K.N.I.L. veterans is a good example where former colonial soldiers and officers received an unwelcome stay in Camp Westerbork.

Now we live in the year 2015. Still people exist for whom skin tone defines race thus indicate superiority or inferiority. That is often expressed in racist and extremist opinions. Western European languages are littered with traces of these old assumptions and the painful heritage of slavery and colonialism are sometimes painfully visible. Still in the Netherlands some issues related to about 350 years of slavery and colonialism linger. By being aware of my roots I know I have to learn from history and sometimes that hurts.

Currently I am rereading this book again. Some passages are enough to for a moment stop breathing and to feel a wave of thorough disgust. What the Europeans and in the context of this book the Dutch did and justified in the spirit of their time is a side of history that is too often neglected.

When as a teenager I did not find this book on the literature list I was angry. When people downplay the Anton de Kom’s work because of his bias and political beliefs I become angry. When you become aware of where he came from and where he lived you learn that he either had to be silent or speak up.

He spoke up and wrote a work that reminds the reader of how people from Africa were worked to death and tortured in the name of slavery and colonialism. Sometimes I feel deep shame when I look at my passport…