Amsterdam is a strange city. At its core it still is a village. In the grey shadows and city limits all kinds of people meet to indulge in the pleasures of life, common and uncommon. Yesterday, the 4th of October I was at the Spinhuis. This is an old university building owned by the University of Amsterdam, abbreviated UvA which is the old city university.

Either way I was a guest at the Spinhuis and we ate sukiyaki followed by “Paprika”. “Paprika” is a Japanese animated film about a protagonist who is intermittently in reality and dreams. This is a 2006 film based on a Japanese novel of the same name by Yasutaka Tsutsui. Satoshi Kon directed the film and the film was produced and released by Madhouse and Sony Pictures Entertainment. For additional information check IMDB and Wikipedia but most of all experience the film. This film is subtle, fascinating and rewarding for the artistic animation alone. I prefer anime over mainstream film and series for a reason.

“Het Spinhuis” in its current situation is between reality and dreams. The UvA and the students both have their perspectives. I am partial to the students with their “fuck the top-down university policy” as I am a student too. I hope the university listens. Universities as corporations are not beneficial for ambitious students. Education is about continuous development, not taking orders.

Joris and company, I can only wish you the best. The UvA cannot simply ignore its students… 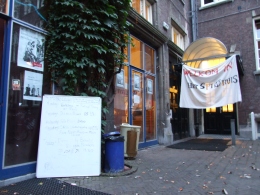